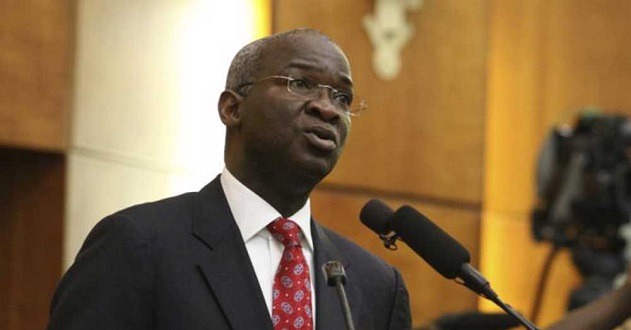 The minister of Works and Housing, Babatunde Fashola , on Thursday, gave reasons for the looming bad roads across the country.

While addressing the House of Representatives Committee on Works, he stated that the sum of N157 billion was not sufficient to cater for the outstanding debts on road projects.

He also warned state government to focus on state roads, saying that Federal Government would no longer make refunds to states that repair federal roads,

“When we came in, we inherited quite a number of such debts from states which repaired Federal roads and asked for refunds. The President directed that we pay all those that were approved by the previous government.

“States should concentrate on their own roads and that states can only get involved in Federal roads, if they are repairing them and not coming to ask for refund,”

Giving an analysis of ongoing road projects in the country, Fashola said about 524 projects are currently under construction across the country, with four multilateral-funded road projects, 81 roads under the Presidential Infrastructural Development Fund (PIDF) and 45 others being funded under the Sukuk bond.

He said N255 billion was required to fund some of the major roads, adding that the ministry was concentrating on roads that would encourage businesses in the country.

He listed some of the projects under the PIDF, which are: the Abuja-Kaduna-Zaria-Kano road, the Second Niger Bridge, the Lagos-Ibadan road, the Mambilla Hydro project and the East-West road.

He stressed that the projects were not under his ministry.

The minister, who said the Third Mainland Bridge in Lagos was the busiest road in the country, explained that his ministry had undertaken a daily traffic counting for the first time in 10 years.

He explained that the result of the count gives credence to the argument that toll plaza should be returned to Nigerian roads.

Speaking on private sector involvement in funding road projects across the country, Fashola said the Sukuk project was a private intervention as well as the PIDF project through the Sovereign Wealth Fund.

Speaking further, the minister said majority of the road projects undertaken by the ministry came from members of the National Assembly.

He said: “We are talking about the lack of capacity to complete ongoing projects and many of you are asking for more projects.

“You can bring in the project and we will do all we can to undertake them. But you must bear in mind that we don’t have the required capacity and our manpower is not increasing”, the minister stated.

APC Will Fail To Get 20 Percent Vote- PDP