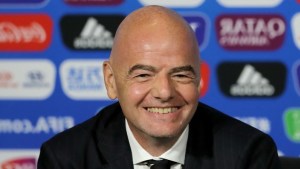 The President of FIFA, Gianni Infantino has spectators who racially abuse black football players will be ban as he called for end to racism in stadiums.

Infantino while reacting to the incident at England vs Bulgaria game stated that the world body would punish racism.

The FIFA President while speaking at a press conference said if there are racists that abuse footballers, the match would be stopped.

He noted that the racists can not be allowed to win and they must be punished.

Infantino revealed that it is easy to identify racists in stadiums with closed-circuit TV, he added that a strong message must be sent.

He noted that they must not be allowed to enter into football stadiums any more, and criminal proceedings should be brought against them.

“It’s a crime and it should be a crime in all countries of the world to commit a racist abuse,” he said.

Infantino reaffirmed that if a country bans a spectator because of racism, “FIFA will extend it worldwide because racists have no place in football in any country and no place in any football stadium or arena in any part of the world.”

Six Bulgarians have been indicted for abuse at Monday’s Bulgaria-England game when monkey chants and apparent Nazi salutes overshadowed England’s 6-0 win. Three more are being sought.

One 18-year-old was indicted on Wednesday for using Nazi salutes and four others have been fined and banned from sports events for two years.

Infantino had already condemned the incident in a statement on Tuesday, calling racism an “obnoxious disease that seems to be getting even worse in some parts of the world”.

He said Thursday that on top of stadium action better education was needed.

“We have to educate our youth, our children and those who are a bit older as well,” he said.

Infantino also said that the 2022 World Cup in Qatar “will be the very best World Cup ever” despite new controversy over the heat and empty stadiums after the world athletics championships in September saw some long-distance races badly affected.

The FIFA boss insisted that it would be cooler as the football tournament would be in November and December.

“I am sure in Qatar we will witness from a technical point of view, the very best World Cup ever.” He also expressed confidence that the stadiums would be “full”.

“Football is the number one sport in the world. We will fill the stadiums in Qatar and anywhere else in the World easily with the World Cup.”

Related Topics:FIFARacism In Football
Up Next