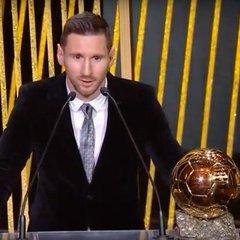 The duo of Messi and Ronaldo dominated the world football scene as both shared five Ballon d’Or each, but Messi’s recent performance has been rewarded with his sixth award.

Champions League winner Van Dijk came behind Lionel Messi, followed by Cristiano Ronaldo as the third-best player in the world.

Senegalese international, Sadio Mane who has been in great form for Liverpool came fourth behind Ronaldo.

The 20-year-old, who joined Juventus this summer after helping Ajax reach the semi-finals of last season’s Champions League, beat Borussia Dortmund and England forward Jadon Sancho to the award.

The Only. One. Ever.