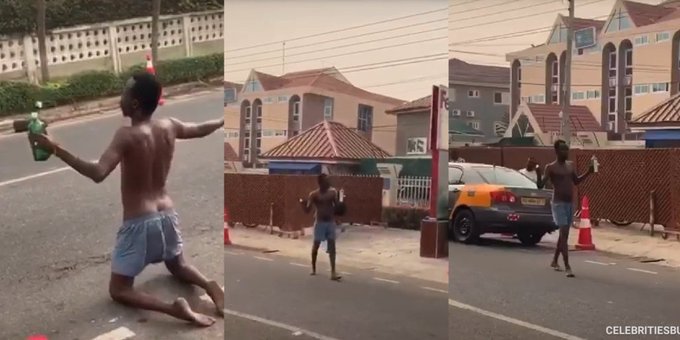 An unidentified young man captured in a viral video may have had a rather rough ‘new beginning’.

The young man who stirred controversy in front of a FedEx office, alleged theft against officials of the delivery company, according to a social media user.

In the video, shared by one @Greatman on Twitter, captures the young man who was clad in a blue boxer shorts had grabbed a bottle of schnapp and an egg invoking curses on officials of the delivery company while pacing along the street.

In spite of the several pedestrians who stopped to keenly observe him, the unperturbed man who seemed serious about his acts went ahead to remove his boxer shorts to continue cursing.

He is heard saying, “…they said my goods cannot be found Nana (god) but show them what rightfully belongs to one person cannot be given to another. Please deal with anyone who felt my goods and saw the paper works yet claims my stuff are not there…”

“…Nana (referring to a god) deal with the person,” He repeatedly cursed.

Despite the awkward nature of the video, it did not go unnoticed on Twitter as several users picked the side of the man and shared their experiences at some FedEx offices across the country.

A user who appeared to be a witness tweeted, “It’s not funny. I was there that day when he came for his package. Trust me I could see the anger and pain. I’m not surprised he is doing this. (Not to pry, but all security men and sorry to say cleaners even use iPhone) think about it

The video has been watched over 22k times on Twitter.

He got to FedEx and he was told his package was stolen.😭😂💀 pic.twitter.com/HaM4fdS0Xt

Lady Reveals 7 Requirements Her Potential Man Must Have