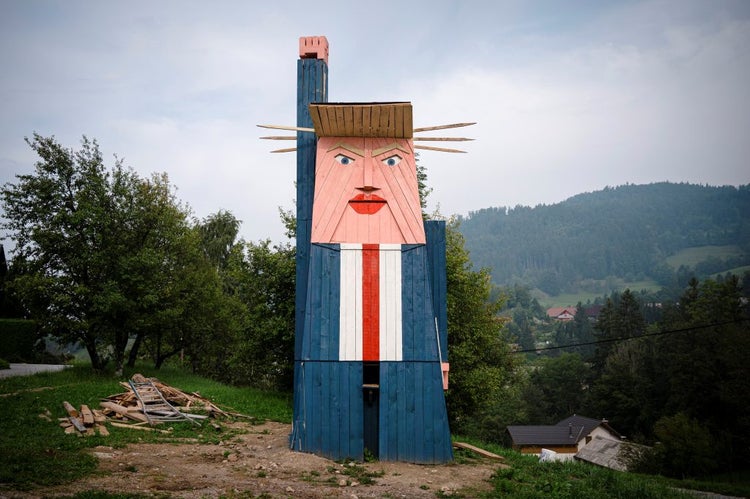 It was named “statue of liberty” by architect Tomaz Schlegl who wanted it to serve as a criticism of populist politics.

Initially installed in the Sela pri Kamniku village, 30 kilometres (20 miles) north of the capital Ljubljana, the statue was moved in December to the nearby town of Moravce after protests by villagers annoyed at the increase of tourists wanting to see it.

But shortly after its arrival to Moravce, vandals damaged the statue by drawing a moustache on its face in a clear reference to Adolf Hitler.

Early Thursday, firefighters rushed to extinguish the blaze that completely destroyed the statue. Police are expected to launch an investigation, according to Moravce mayor Milan Balazic.

“This is an attack against art and tolerance against Europe’s fundamental values,” Balazic told AFP, adding many tourists had come to see the statue since it was installed last month.

Balazic had paid 1,500 euros ($1,700) for moving the statue to Moravce, to see it as an opportunity to promote his small town.

Architect Schlegl said he saw the suspected arson as an act against Trump given recent escalation of tensions after the US ordered a deadly strike against an Iranian general.

“I believe these attacks are understandable bearing in mind what’s happening in the world,” Schlegl told AFP.

Slovenia, a member of NATO since 2004, announced Wednesday that it was evacuating its six soldiers deployed in Iraq as part of the alliance’s training mission following Iran’s retaliatory attacks against US troops.

Balazic said he planned to install a new sculpture, calling it the “tolerance statue” though this time it would be made of more durable material — rather than wood and it would not depict the US president.