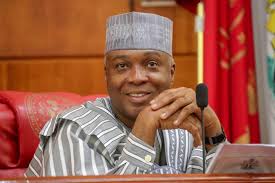 Lately, writers have bombarded the internet with different views on how the empire of the former Senate President, Dr Abubakar Bukola Saraki, has suddenly ‘crumbled’ following the demolition of his family property, Ile Arugbo, by the vindictive Kwara State government.

Some would have thought that ended with Bukola Saraki’s defeat at the polls. However, the irony is that the same naysayers who go about dancing at the perceived fall of the Saraki dynasty, out of nothing to write, would have been full of praises with headlines like ‘The Rise and Rise Of The Saraki Empire’ if he hadn’t lost the senatorial election that would have returned him to the senate.

Surprisingly, this newfound obsession with Bukola Saraki came to the fore when the spiteful government stuck, and one begins to wonder the correlation between that and the perceived crumbling of his empire.

In the feeble minds of these lot, Ile Arugbo, to them, probably signified an empire. Every student of politics knows that no single building means an empire, but in their rush to churn out their ill-conceived narratives, they tend to transfer their hatred for the father, Dr Olusola Saraki to the son, Bukola Saraki.

For those who think his empire collapsed with the demolition of Ile Arugbo, it is imperative to remind them that it will take a million bulldozers to separate the name of Saraki from Kwara state. Instead of trying to rename the Kwara State University (KWASU), Gov. Abdulrahman Abdulrazaq might as well order his bulldozers to visit the place.

While doing that, he can also visit the Ilorin International Aviation School as well as the Civic Centre on the Asa Dam axis. The Shonga farm holdings should not be left out too.

These and many more are the legacies of Olubukola Saraki in Kwara state.

As Saraki himself said after the notice to demolish his family house, “Perhaps, I should let it be known that if Abdulrahman Abdulrazaq thinks he is taking all these actions to get at me, he is only deceiving himself. There is no basis for competition between us.

“Our paths cannot cross because of the status that he is struggling to attain; Almighty Allah has given it to me many years before now. I became Governor 16 years before him and served out my constitutional limit of eight years. Within the period, I was Chairman of the Nigerian Governors Forum. I have moved on to serve in the federal legislature, and by the grace of God, I headed the National Assembly as the number three man in the country.”

“No matter how well he tried to rewrite history, it is on record that I left Kwara State a lot better than I met it. This Governor needs a lot more effort, years, Intelligence and resources to attain the level Allah has taken me, not to talk of my late father, Dr. Olusola Abubakar Saraki, the Senate Leader in the Second Republic.”

Bukola Saraki might have lost an election, and to the agent provocateurs, that might have spell doom for his empire, but those with a better understanding of the man and his politics know that he will bounce back. Kwarans might have got tired of the name ‘Saraki’ at the helm of affairs by deploying the ‘o to ge’ mantra, but people like him always bounce back.

Dumping the APC for the PDP was one of his mistakes, but all indications showed that he was no longer wanted at the party. Saraki brawled his dad, Olusola; fought his sister, Gbemisola, the Minister of State for Transportation, battled his party, the APC, and the Buhari led Executive and emerged unscathed from these battles. He is a warrior who survived a lot of scheming to see out his tenure as the Senate leader.

Sometimes, a break is needed to have a better understanding of what went wrong, re-strategize, and come back stronger. With the race for 2023 presidency gathering momentum and a lot of realignment expected, Saraki is only taking a much-needed break!

50 YEARS AFTER CIVIL WAR: We Must Embark On Sober Reflection – SOYINKA

The Collapse Of Saraki Empire Prt 3 By Ono Bobi