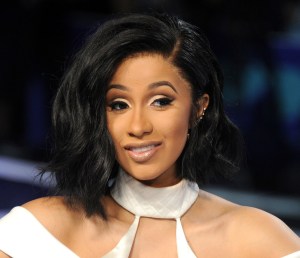 American Rapper, Cardi B has said that she is interested in running for Congress.

Cardi B who has been vocal about her distaste for the political actions of President Donald Trump, sparked a social media frenzy on Tuesday with her statement of interest.

Cardi had earlier lamented the uncertainty that clouded the #IranvsUSA trend, expressing her fear of a potential crisis.

She hinted she was interested in taking up Nigerian citizenship but was torn between changing her name to Chioma B or Chadijat.

She has now come out to say that she has some ideas which she would like to implement if she got the opportunity to serve in Congress after getting some education.

Taking to Twitter, she said, “I do feel like if I go back to school and focus up I can be part of Congress. I deadass have sooo much ideas that make sense. I just need a couple of years of school and I can shake the table.”

Many have thrown their weight behind the rapper in support, but naysayers suggest that the former stripper should be behind bars instead.

Cardi was once a stripper who confessed to drugging and robbing men, and even starred in a movie titled “Hustlers” to depict it

US To Minimise Presence In Africa